The Consumer Price Index (CPI) measures the average prices of goods and services purchased by consumers. In the United States, the CPI-U calculates the CPI for all urban consumers.

The CPI-U is calculated based on prices of food, clothing, shelter, fuels, transportation fares, charges for doctors and dentists’ services, drugs, and other goods and services that people buy for day-to-day living. All taxes directly associated with the purchase and use of items (such as, in the United States, sales taxes) are included in the index. An increase in CPI-U by a certain fractional amount means an increase by that fractional amount in overall prices within the relevant category.

For analyzing general price trends in the economy, seasonally adjusted prices are usually preferred over unadjusted prices because adjusting eliminates the effect of changes that normally occur at the same time and in about the same magnitude every year—such as price movements resulting from climatic conditions, production cycles, model changeovers, and holidays. 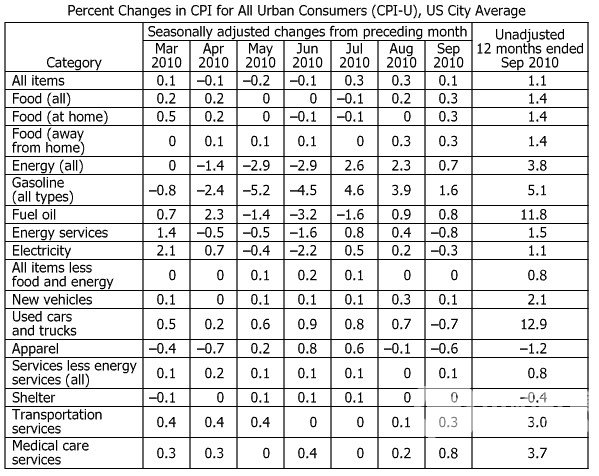 For each of the following, select Yes if the statement is inferable from the given information. Otherwise select No.

2. The seasonally adjusted CPI-U for all items was higher in March 2010 than in the previous month.